Sometimes she puts whatever she’s stealing in her head wrap, but mostly she uses her partner in crime, this banjee girl, to distract the stall owner while she slips stuff all sneaky like 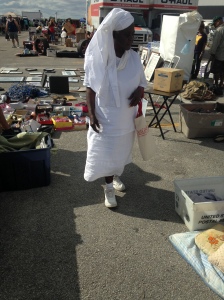 They caught me taking their picture and the old lady got loud and was yelling at me. I should’ve told her to shut the hell up before I snitch and mess her game up, but I was a little bit afraid, she is dressed all in white and might be a Haitian vodou preistess.